Racing in Big Bear…. it doesn’t get any better!  Pine trees, loamy (and sometimes loose) soil, the wind rustling through leaves, and high altitude asphyxiation is a tonic for any mountain biker.  The Kenda Cup Big Bear Shootout #1 occured last week and Samantha and I were anxious to get back to racing after an amazing ten day vacation in Belize (more on that in another post).

I did have some trepidation about racing both the Super D (on Saturday) and the endurance race (Sunday) because of my ribs.  Three weeks prior to the race, I crashed and busted some ribs.  X-rays were inconclusive but the Dr. said regardless of broken or not it came down to pain tolerance.  Advil up and saddle up!

I brought up my kick-ass new bike for the weekend’s party since a little double-dipping was in order.  If one wants to do well in both a downhill event and an endurance cross-country event, two different bikes are typically considered.  Not for me.  My new Pivot Mach 429 Carbon was built for this exact type of weekend.  I built it up as my “don’t care what’s in front of me, let’s F-ing charge it” bike (9/2/14 Update:  Here’s the build).  It’s the full suspension bike equivalent of a reverse Mullet:  5″ party in the front, 4″ of business in the back.

My trail killer: Pivot 429 Carbon. Such an amazing bike. 5″ party up front, 4″ of business in the rear. I’ll provide a post in the future about my build.

A shout-out to Team Big Bear, who organizes the races, for adding a second run to the Super D format this year.  So we were able to make two runs down the same course with results based on cumulative time.  The SuperD course also had the new Plumbers DH trail (which will become lower Skyline trail), which was cut the prior weekend (thanks Big Bear Trails Foundation!).  It was a rough cut… and with California’s drought in full swing, the trail was quite loose and required careful attention to how you entered turns.  The XC course included this same trail and many were complaining about the trail conditions.  I get it… we all want to be as fast as possible…. but stop bitching cuz we’re not roadies!

Take the trail as is, and rail it as fast as possible.  That’s why we ride mountain bikes… we don’t need perfect conditions.  {rant over}

I was stoked that Samantha decided to try the SuperD too.  Why not, since it’s part of the XC course, we figured.  She had fun and even finished 3rd in her first DH event.  Good enough for a PBR tallboy at the Snow Summit bottom.  I was able to finish with the fastest times in the amateur division…. only the local pros bettered my times.  I’ll claim some of the credit, but the Pivot was OFF THE HOOK FAST!

PBR tallboy cheers at the base of Snow Summit

1st place for my SuperD efforts! Slaloming through the Big Bear pines in the Super D race in June.

Samantha toeing the line for her first SuperD. 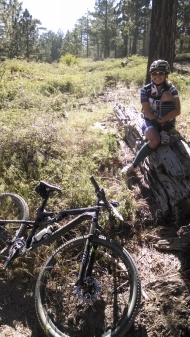 The next day we woke up, made our coffee, finished off our oatmeal with blueberries, made our race bottles, and prepped the bikes for cross-country.  For my Pivot, I raised the seat back up, put on the saddlebag (tube, tire lever, chain quick link, CO2), and adjusted my tire pressure.  We met up our Kasel Cycling teammates and pedaled up to the start of the endurance race start line.

Generally, I tend to start fast and hope I have the legs to continue on.  I knew this strategy wasn’t going to work because I wasn’t in top shape.  Coming off a long vacation and rib injury, let’s just say I didn’t have much race sharpness.   So I started the climb up 2N10 and quickly lost my teammates wheels.  But I was surprised by how quickly they were distancing me.  OK…I don’t expect to have great legs….but I should have SOME LEGS!  I decide to wait until the first downhill since I generally feel better and indeed this was the case again.  The middle part of the course features rolling fireroad and I was able to reel back many of the riders who initially passed me.

The real race occurs on the Skyline trail.  My favorite trail in Big Bear.  It’s undulating, at times technical, forces anaerobic efforts, and long.  With my Pivot, I was able to stay seated, pedal smoothly, and power through sections and made up a lot of time on many riders.  On lap two I made contact with the front of my age class and was able to reel in one of my teammates ahead of me at the end on the downhill portion of the course that was featured in the SuperD.  In the end, I finished 5th in the Open 30-39 class, which I’m quite happy with considering how awful I started and the lack of race sharpness in my legs.  The Big Bear Shootout #2 occurs next week and I can’t wait to ride the Pivot back-to-back again!