Pain.  The Bonelli XC course can dish it out with punchy climbs, loose off-camber turns, and a lack of places to recover.  Not a good recipe for my delicate lower back of late.  Knowing our starting time was early due to the top pro’s racing later in the day, Samantha and I got up pretty early to arrive at Bonelli Park early enough to grab a good tent/pit location and to get a good warm-up in with my teammate Josh.  Little did we know our warm-up was as going to be the highlight for both of our XC races.

Josh all smiles before the race…

The call-up to the line is given and I’m at the back of a fairly deep group in the CAT1 30-39 class.  Twenty-three motley colored Lycra-bound waifs ready to rumble in the Bonelli soil.  The gun goes off and we’re sprinting.  One minute in and I’m already wondering why it is I do this.  But the good news is that my back feels spry and ready to play.  Half way into lap 1 of 4 and I hear Samantha, camera in hand, hooting and hollering up on the hill as I approach.  It was nice to hear her cheer me on…. I was going to need it.

Near the end of lap 1, somewhere around the 73rd punchy hill, my back lets me know it’s done feeling spry.  As I pass the team tent for the first time and reach for a fresh bottle I see Josh sitting with his family and Samantha and I simultaneously feel bummed for him and jealous.  His race is done… but man he looks comfy sitting there!  Come to find out, 1/4 into his first lap his chain wrapped around his crank and his rear derailleur folded.  Bad day for the Kasel Cycling CAT1 racers.

Samantha took this great photo.  Springtime mustard in full bloom as I round the turn.

You go into a race with positive thoughts, trusting your training, with some clear objectives.  Mine was to be competitive and given the size of my field, try and finish around #10.  Now on lap 2 it’s time to shift objectives to diminished but realistic goals.  My new goal:  not finish last.  No joke.  A humbling objective.  Last year at this race I was being encouraged to hit “Home Runs!” at the front of the pack… now my back is making me limp around the race course like Kirk Gibson rounding the bases after his glorious home-run in the ’88 World Series.  At least he hit a home run.

I managed to finish 14th, 1 spot above the last person in my group.  23 started, 15 came back.  Yeah, Bonelli is a tough course.  Here are some photos and the last two capture the pain in my face (I swear my wheels were square!). 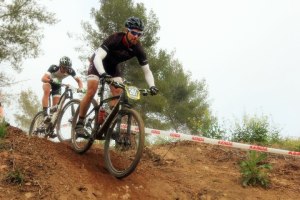 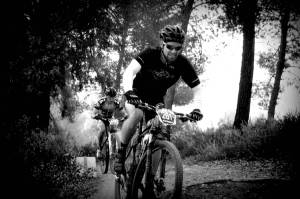 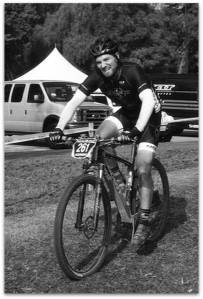 After the race, I got to chase Samantha around the race course again (but on foot) as the top female and male Pro racers showed everyone how fast a mountain bike can be pushed.  I think I was more impressed by the female pro riders than the men.  They fly and it was both inspiring and enlightening to watch them turn themselves out and dig deep to keep the speed.  My favorite photo of the day was when I captured Samantha cheering on the pro girls next to a descent.  Here she is with Trek’s Emily Batty streaking by.

Emily Batty and Sam at Bonelli.

We also had a great time cheering the two crankbrothers Race Club riders Chloe and Jody on.  The two of them had an excellent weekend with podiums in XC, Super D, and short track! 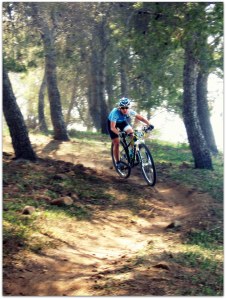 Chloe Woodruff through the Bonelli trees on her way to a 4th place XC finish. 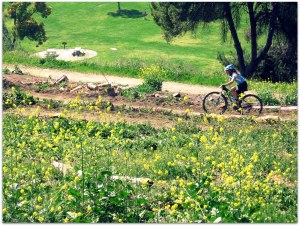 After the pro races I suited up again for the Super D, which I covered in my previous post.  We then packed it up for the night and re-appeared the next morning for the CAT2&3 race which Samantha and other teammates were in.  Samantha continued her impressive riding and picked up a 3rd place podium position.  Glad to see someone in this family can ride!   Using my GoPro burst mode, I captured the following photo sequence.  Try this flip-book style by clicking on the forward arrow quickly:

V for Victory. Samantha on her final lap.

Mike on his single-speed

Next race:  Fontana XC and SuperD tomorrow, March 30!  My plan is to take several Advil before the race to (hopefully) keep the back happy.