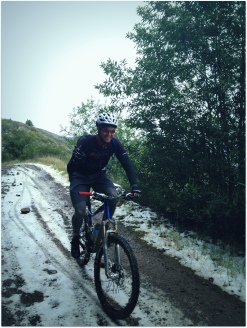 The Santa Ana Mountains make up the eastern boundary of Orange County and when the conditions are right, they rise high enough to squeeze out enough moisture to produce a carpet of snow.  Mammoth Mountain it is not, but it makes for a great excuse to drive 25 minutes from home near the beach to go roll in snow with teammates and some of their friends.

We converged on the Blackstar xmas tree parking lot at 8am, exchanged hellos (several of us met for the first time), scanned the skies, and mounted up.  Route proposed:  Blackstar to Motorway via Main Divide and back down to the xmas tree lot.  A 26 mile ride with 4,300 feet of climbing which takes between 2 1/2 hours to 4 hours depending on pace.  It was the latter this weekend due to some tough sledding in a couple of areas and a nice conversational group pace (at times). 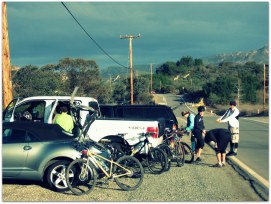 This was going to be ride #2 for my new Serfas Scandium mtb shoes.  I’ll review them in the coming weeks, but so far I’m impressed with these new Serfas shoes after two long rides!

The first real climb is up Blackstar canyon, past hidden valley, and up to the radar ball on the main divide fire road.  The fire road was generally in good condition considering the rain that fell on Friday except for an area in Hidden Valley with high ground water.  The mud was unavoidable and once through we had to stop, find twigs, and scrape out the clay wedged between tire and frame.  Some photos of my Kasel Cycling – Jax Bicycle Center teammates (& wife on the right) heading up from hidden valley and another panoramic view of the valley from higher up.

Our group reconvened once more at the radar ball and we looked south along the main divide ridge and saw a bunch of dark cold clouds shrouding Pleasant’s Peak (not aptly named on this day).  Many reached back into their camelback and brought back out the jackets.  We pressed on and from this point the pace changed and so the group splintered.   (BTW – Garmin registered 39 degrees at the base of not-so-Pleasant’s Peak) 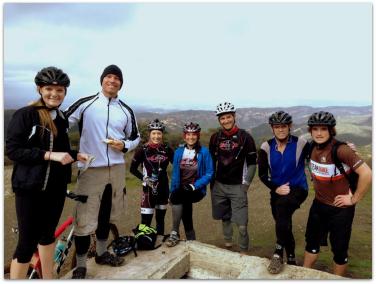 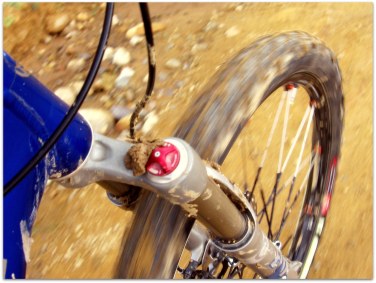 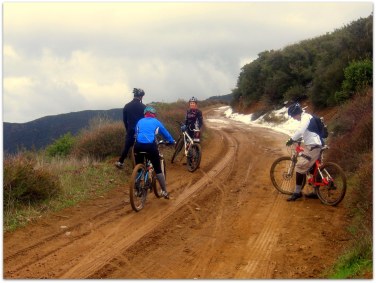 Main divide ridge is a continuous up-down-love-HATE-affair.  And it was much slower going today as the soil was very tacky.  At times, there was mud but most of that was avoidable.  As shown in the photo above, the soil was all too malleable and formed around the tire without caking onto it.  Rolling resistance in the extreme.  But nevertheless, we all enjoyed being able to see and leave our tire tracks in the snow and looked forward to the epic Motorway descent. 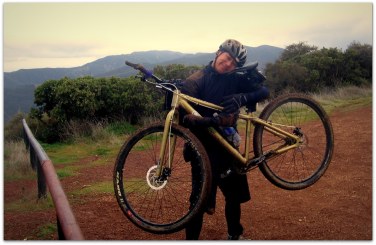 I brought along the Trance full of new crankbrothers bling and rebuilt rear shock to try and set a new PR down the Motorway DH.  Here in the OC, it’s a well known trail for taking its share of sidewalls and collarbones.  It took my teammates collarbone on a ride before xmas so I have a healthy respect for this trail.  It’s just short of 3 miles and in that distance sheds 1,800 feet for an average 12% grade.  Oh – and much of it is on loose rock with exposed drops.  But today, with the recent rain, the soil and notoriously loose shale was well behaved and I was able to set my PR of 10:14 minutes.  Oh – and girls also set new PR’s! 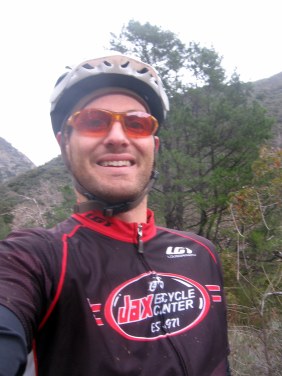 Made it down Motorway w/ a new PR. Self-obligatory shot at the bottom. 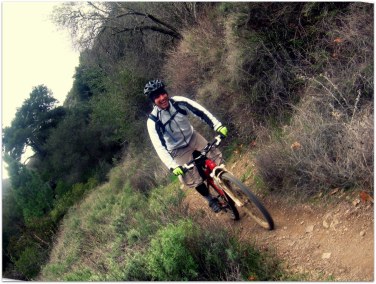 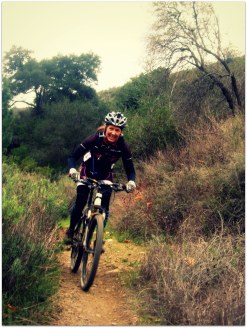 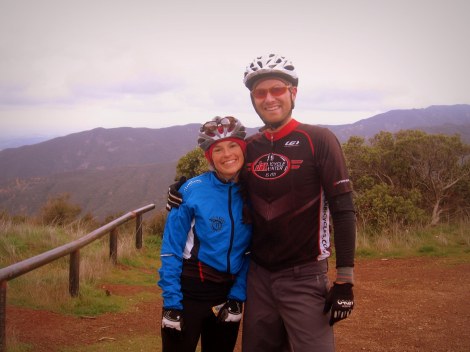