So this post will be a bit different than most Natespin posts as I’ll cover ground not usually covered.  I traveled to San Francisco this past weekend to visit a friend and see The Walkmen and Father John Misty perform at the peerless (at least on the West Coast) Fillmore Auditorium.  And I walked.  A lot.  And it was fun.

Living and working in suburban SoCal sprawl means I travel almost exclusively by car.  When I can, I run errands by bike but my cycling is mostly recreation/training-based with the occasional bike commute.  However, in the Bay Area, the mode of travel is reversed and it feels like a cool but foreign land as people rely on public transit, feet, or bicycle for transportation.  On a Friday post-workweek evening, I arose out of the BART station below Civic Center and was greeted by a stream of bike commuters shooting past me in their dedicated green bike lanes.  Very cool!  Hipster in jeans, mid-30’s professional with slacks, hard-core cyclist, fixie rider, etc. all passing by.  A short walk later and I arrive at my friends apartment. 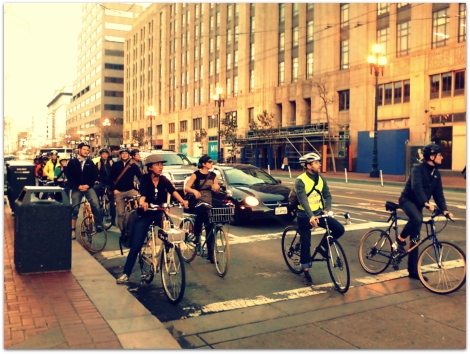 After taking in some choice IPA (Lagunitas & Russian River’s double IPA, Pliny the Elder) to usher in the Friday night, my friend and I lace up the shoes and begin walking towards the Fillmore.  We did a lot of walking this past weekend.  In San Francisco, I think it’s called urban hiking with all the terrain and urban sights, sounds, and tastes to take in.  Yes, tastes.  I forgot how good the food is in San Francisco!  Food options abound and to prove that I experienced Burmese Food for the first time (Burma SuperStar!).

We get to the Fillmore, after dining at a fantastic vegetarian-only Thai restaurant,  early enough to enjoy the museum-like experience that walking through the Fillmore is.  The walls literally tell the tale of rock and roll history with all the concert posters and photos of bands showcased throughout.  Walking up to the bar I find that my favorite brewery, Lagunitas, brews the Fillmore Fusion (a pale ale) just for the Fillmore, so naturally I drink some.  (Some is an approximate volume that equates to enough to know I drank enough not to know how much I drank) 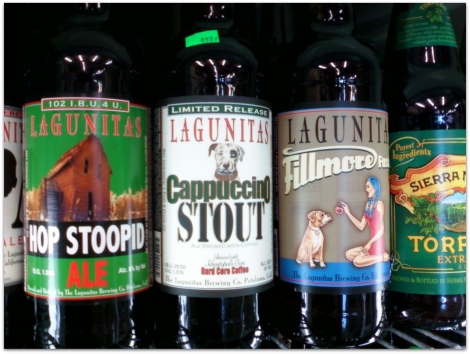 I found a 22oz. bottle of Lagunitas Fillmore Fusion later that weekend.

The concert was awesome!  First time seeing both Father John Misty & The Walkmen.  The latter are great and you can tell they’ve honed their sound on-stage over the years.  Quite professional and on form.  I’d gladly see them again.  As for Father John Misty – I’ve really enjoyed listening to him on Spotify over the past couple of months and have only experienced his music audibly.  I never tried looking him up online or on YouTube to “see” him.  Of course, to see someone live is to experience more than just the music and in this case, Father John Misty is impressive.  I’m still not quite sure what to make of it, but either way I’m impressed.

Let’s just say there’s a lot of theatrics (think Jim Morrison style with suggestive hip moving/dancing, twisting up in the microphone, and stage banter) in his live performance and while I think a lot of it is alter-ego showmanship, there is a certain earnestness in it that holds the audience’s attention.  I think it’s probably best to experience Father John Misty through the ears first so as not to “flavor” or bias one’s opinion, but throwing caution to the wind, scrolling anywhere between the 3:50 through 6 minute mark in this video provides you an idea of his stage persona.  Studio version of the same song:

As for the rest of my weekend… lots of urban hiking on Saturday & nature hiking in Marin County on Sunday as told by a couple photographs taken with my not-so-smart flip phone (aka my iFlip):

Alamo Square Park with fine views of the SF skyline on a clear January afternoon. 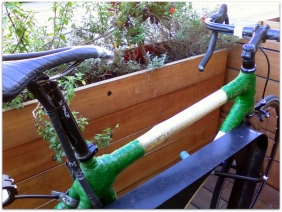 Outside Arizmendi Bakery (amazing pizza and cookies), a handmade bamboo bike. Not sure I’d ride it, but it obviously works. 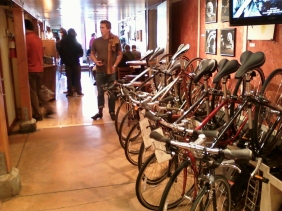 3 of my favorite things under 1 roof:  bikes, coffee, & pastries.  The Mojo Bicycle Cafe houses a bike shop and a coffee bar near Golden Gate Park.  Brilliant!

Mount Tamalpais State Park.  Starting at Pantoll Ranger Station, we hiked down the Matt Davis trail to Stinson Beach (beach in background) and back up via the Dipsea and Steep Ravine Trail.  A 7.5 mile loop with 1600 feet in elevation. 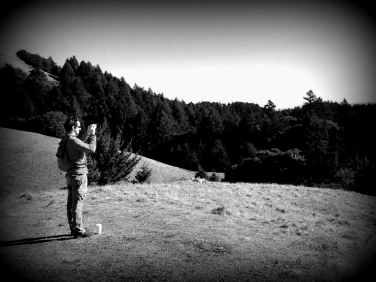 My friend, taking superior pics with his superior phone. 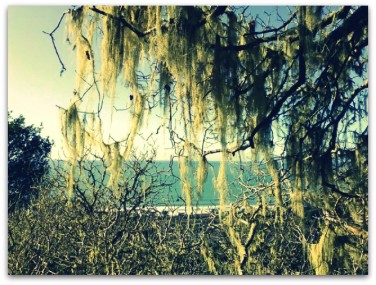 Moss on a California Buckeye, above Stinson Beach, CA. 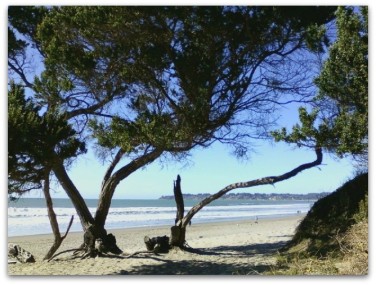 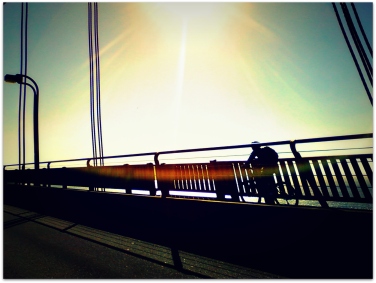